Cathaoirleach Cllr. Orla Leyden recently launched the County Roscommon Intercultural Project at Áras and Chontae, Roscommon Town recently. People from all across the county from every nationality attended the event, many dressed in their native dress, with musical entertainment provided by a local Slovakian Family band. The foyer in Áras an Chontae was alive with colour, music, singing and dancing and general gaiety at 6pm in the evening of 12th April.

that according to the 2016 census there are 6596 non-nationals living in County Roscommon, which represents 10.3% of the county’s population and there are 516 Travellers living in the County
Nora FahyProject Manager

RWN secured funding for an Intercultural Family Sports/Fun Day event from the Department of Justice and Equality, Roscommon County Council Arts Office and Creative Ireland last September. During the last few months RWN have connected with members of many cultures living in the county including, Romanian, Polish, African, Slovakian, Irish, Portuguese, Lithuanian, people from the UK, Brazil, Irish Travelling Community, Syria, Germany, Pakistan, Russia, Croatia, to name a few. The musical entertainment at the launch was provided by a Slovakian family band, their second only performance to a life audience, the first being at the RWN International Women’s Day celebration on 8th March in Gleeson’s Restaurant & Rooms. RWN have helped the family secure a much needed set of drums to complete their ensemble, the drum kit was donated by a family in the county. 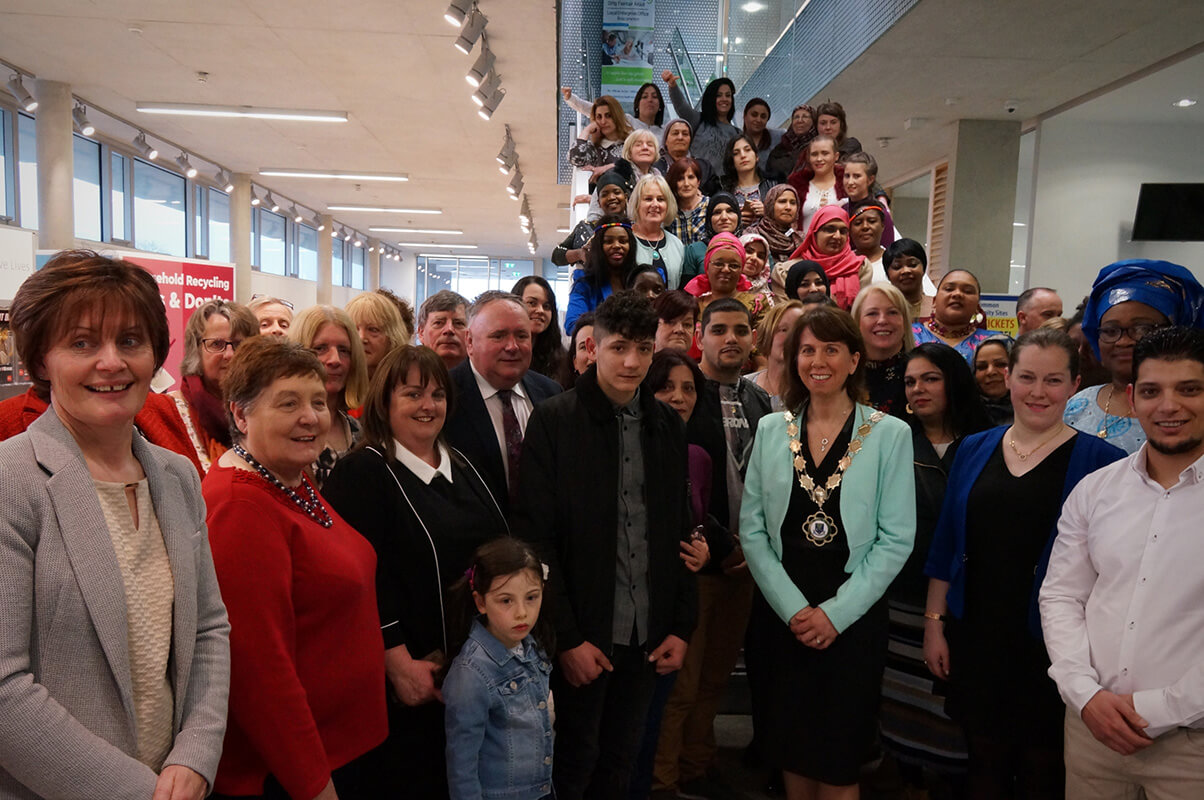 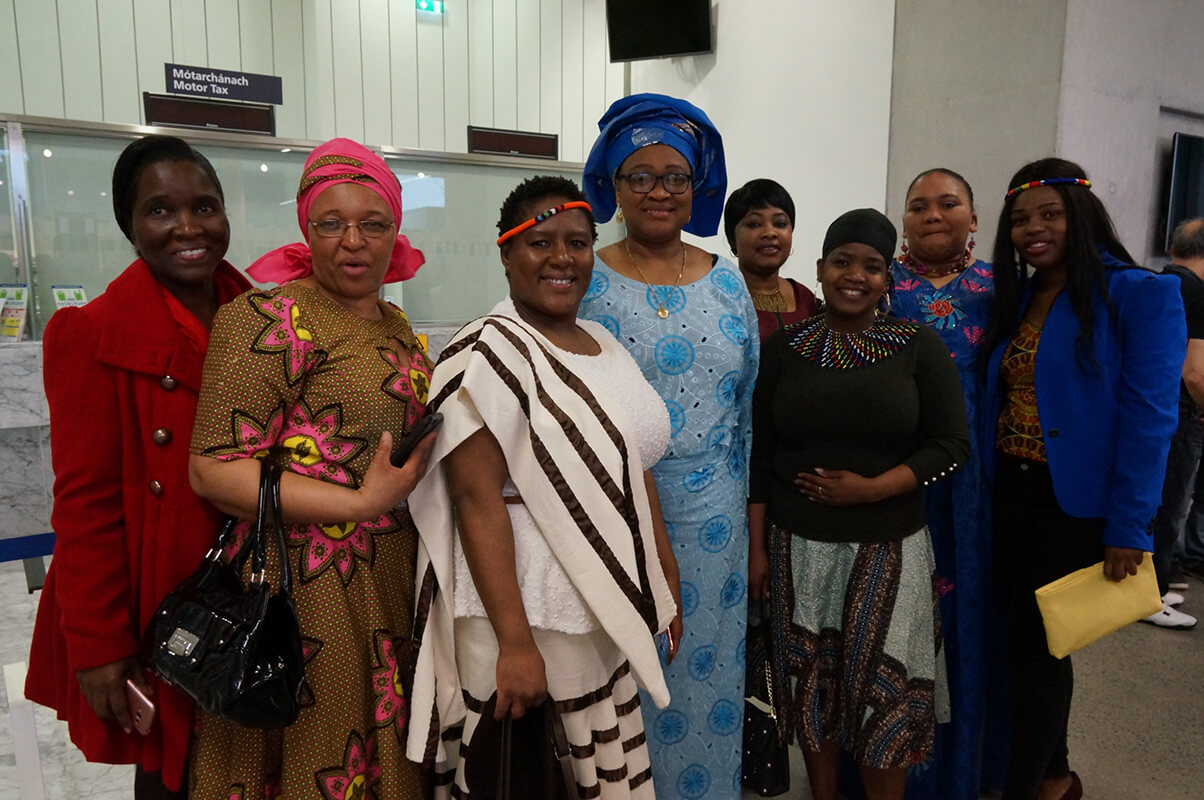 Representatives from the various cultures and agencies, facilitated by RWN, have come together over the last few months to discuss and agree what they believed would affect real lasting cultural integration and inclusion, and have formed a project team. Some members of the team from different cultures spoke at the event explaining how they became involved, the difference their involvement is making and how they hope that this intercultural work will continue into the future.   Instead of just one sports event, which was originally envisioned, the group have decided to run soccer, dance, art and drama workshops and camps for children and adults over a six to eight week period in towns around the county.

“The Roscommon County Council Arts office in association with Creative Ireland are very happy to be offering financial support and to get involved directly in this intercultural initiative, we are delighted that this additional support has enabled the team to expand the project to include art and drama”.

Mary complimented and thanked Majella Hunt, Director of Services in Roscommon County Council and Noel Martin for organising the refreshments and layout for the launch event, Mary also thanked Creative Ireland for sponsoring the launch.

The soccer camps started in March in Roscommon Town, Castlerea, Ballaghadereen and Monksland , supported by FAI development worker Adrian Carberry and volunteer coaches. In her address Nora Fahy gave a special note of appreciation to Sligo Leitrim Roscommon Local links for putting on transport to get people and children to and from meetings and the camps.

The Irish dance classes started recently in Ballaghaderreen led by Eithne Fahy, Fahy School of Dancing. Katia De Nova, speaking at the event explained that Capoeira Classes will begin shortly on Saturday mornings in Upsie Daisies, Roscommon Town. Katia described Capoeira as “a Brazilian Martial Art which has elements of dance and music”. Najila Sabir, formally herself, a refugee from Iraq, now living and working in Ireland for ten years also spoke at the event and she translated some of the speeches into Arabic for the benefit of the Syrian guests from the EROC centre in Ballaghadereen. Najila is currently providing Art classes every Monday between 3 – 5pm in the EROC centre in Ballaghadereen as part of this project. Tina Adagun originally from Nigeria and Patricia Kagodora a native of Zimbabwe, both now living and working in Monskland spoke about how they believed this Intercultural Project was different as it was supporting cultures to come together, learn from each other and work together, recognising and using the strengths and experience that everyone can bring to the team. Melanie Ward, a young woman from Frenchpark said at the event “ I am a proud member of the Travelling Community and I am currently a trainee with RWN Training Services where I have helped with the administration of this project, I am really enjoying learning about other cultures, project planning and admin while also seeing life from others perspective”.

There are approx. 150 children from many different cultures and backgrounds between the ages of 7 to 14 currently attending the weekly soccer camps around the county. They are preparing for a world cup tournament which will be played at the sports day on Sunday 29th April in the Convent Secondary School grounds. Registration for this sports event has now closed, however, registration for the dance and drama will begin during the summer. At this sports day there will also be coaches from other sports such as GAA, Hurling, Boxing, Hip Hop dancing to name just a few, who will set up stations around the pitch to give children from all cultures the opportunity to take a 20 minute taster of each sport. Nora Fahy explained that “This structure is based on an annual sports event which was held over the last 8 years in Castlerea organised by a voluntary community group, Project Match Castlerea with support from RWN”.   Nora continued “therefore RWN have experience in running inclusive family sports/fun days successfully, but this is our first County Wide endeavour and our Brazilian, Portuguese & Syrian friends are organising a barbeque for the sports day and every child who has pre-registered will receive a jersey when they arrive in the morning”.

The other speakers at the event were Ceila Ribas, Daniella Stoica, Eva Dzurikova and Paula Flannelly. Speakers told their stories of living in County Roscommon, the welcome they received and enjoy to this day and some also spoke about their involvement in planning this launch, the sports day and also the arts, drama and dance workshops which will continue through the summer months and will culminate in a performance event in the Roscommon Arts Centre on 21st September 2018 to celebrate Culture Day.

In her closing remarks Nora Fahy thanked Majella Hunt, Noel Martin and all the Roscommon County Council Corporate Services staff for arranging the event in their offices, she also thanked Caithaoirleach Orla Leyden, and remarked that Orla had previously served on the RWN Voluntary Board of Directors. Nora also thanked, Mary Mullins, Arts Officer for her support and commitment to the project, Adrian Carberry, FAI Development Officer, Noel Feeley, Roscommon Sports Partnership, The Roscommon Convent Secondary School for the use of their pitch for the sports event, the many sports organisations around the county who have agreed to participate at the sports day, Maria Harris, the RWN Development Worker for her excellent work co-ordinating this project, all the speakers who contributed at the event, the Intercultural Steering committee and project team and the many volunteers from all around the county who are working in the background to support the team. 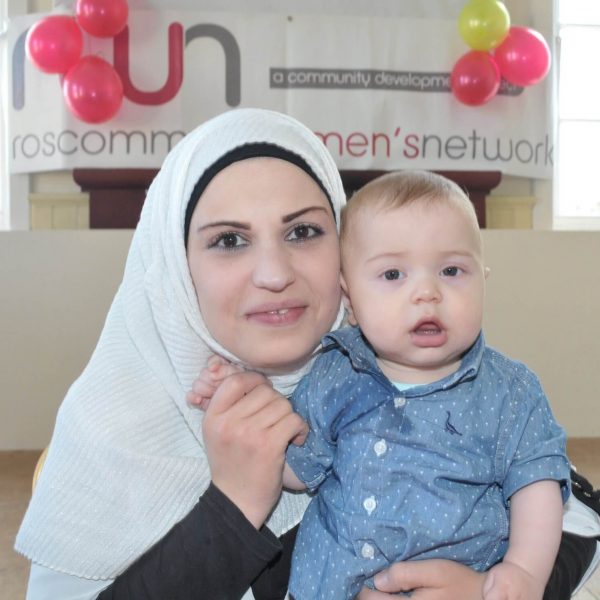 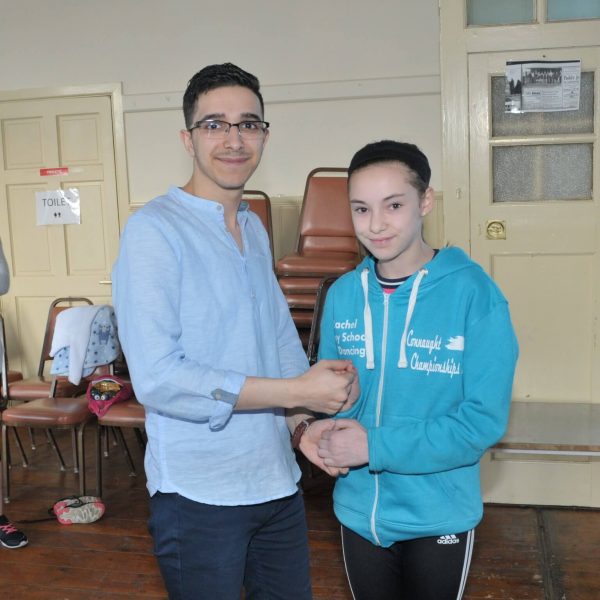 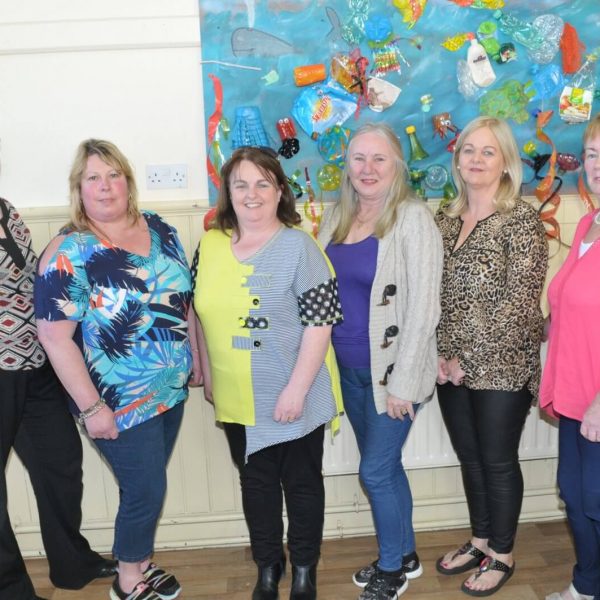 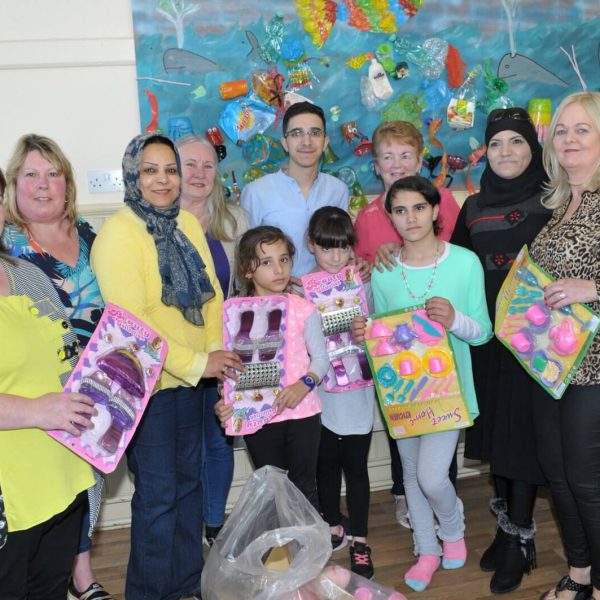 Ballintubber locals made a presentation of toys to the Syrian children 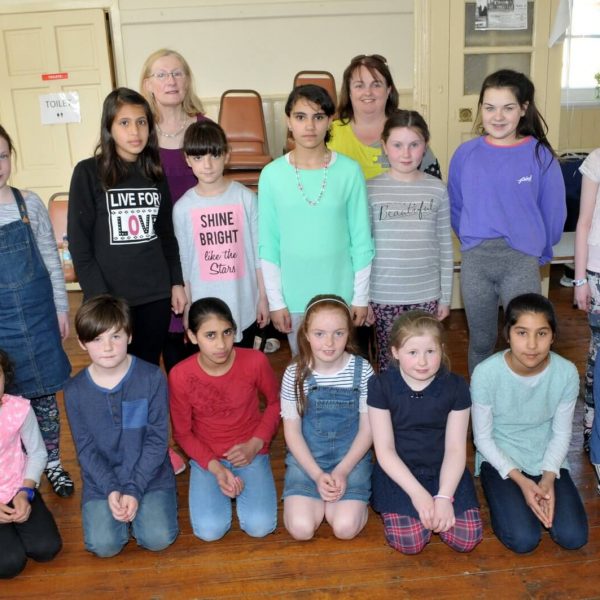 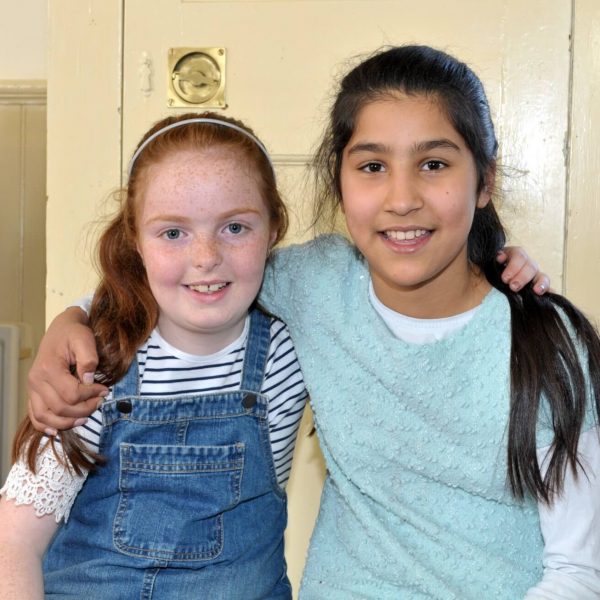 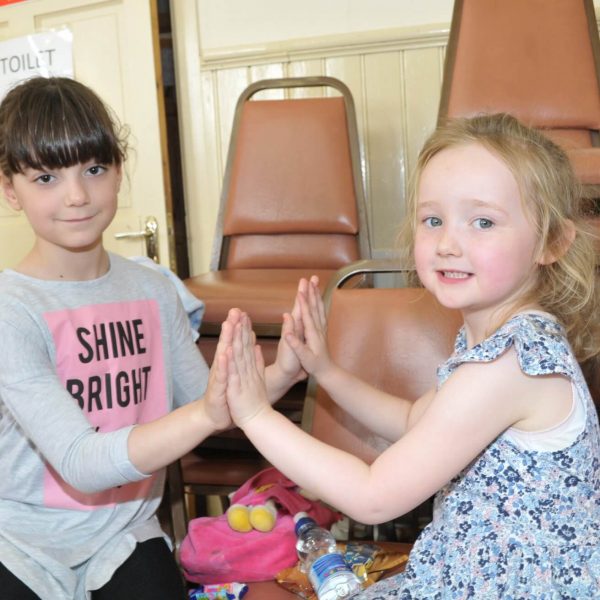 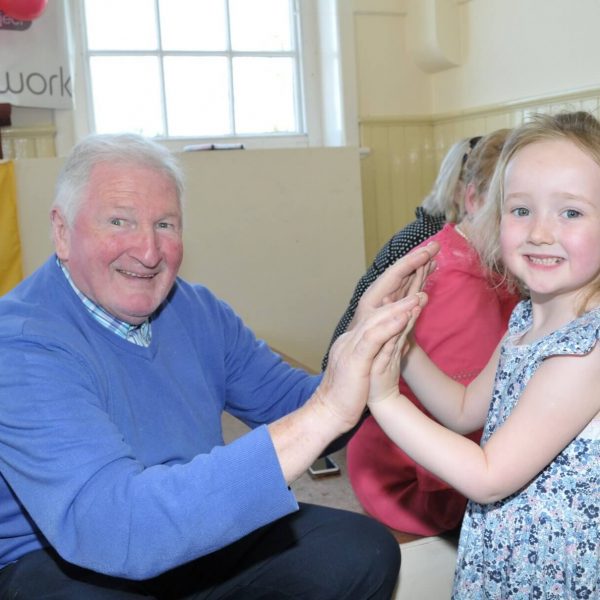 The RWN Intercultural family Sports/fun Day took place in Roscommon town on Sunday 29th April, where 126 children took part in Soccer, Cricket, Gaelic, Rounders, Hip Hop and Hurling. Many children got their first ever opportunity in trying out these sports while others displayed sheer talent, going by the smiles on their faces, fun was had by all. The County wide Intercultural Project is led by Roscommon Women’s Network, supported by a steering committee which includes many organisations and individuals from around the county working together. ”. Nora Fahy, Manager of Roscommon Women’s Network speaking at the event said

I believe this event is an excellent example of true and real multi-level integration at its best and that is what has made the day so special, successful, different and enjoyable.  In my opinion this event visibly demonstrates effective integration on many levels, sports integration, cultural integration; community integration and good county wide organisational collaboration and we need to keep it going.

The event was the result of many months of planning by the Intercultural Steering Committee made up of individuals from all across the world living in County Roscommon, from Slovakia, Romania, Poland, Africa, Lithuania, UK, Brazil, Travelling Community, Syria, Pakistan, Russia, Iraq to name but a few. In the lead up to this event, the committee had organised weekly futsal camps in, Monksland, Castlerea, Roscommon & Ballaghaderreen, and Irish Dancing in Ballaghaderren.

Many of the children from all the various cultures who attended the futsal and dance over the previous 5 weeks, plus many others arrived at Roscommon Convent Secondary School on a sunny Sunday moring with their parents or guardians to have fun together and also have a 20 minute taster of other sports like, Hurling, GAA, Hip Hop, Rounder’s, Cricket and of course Soccer.

Maria Harris, RWN development worker, speaking at the event spoke gratefully about all those who helped out

I want to sincerely thank Charlotte Walton & Raymond Glancy of Oran GAA and the TY lads for looking after the Gaelic, Adrian Carberry, FAI Development worker and his ever dependable soccer coaches for looking after the soccer and Archie Naughten for refereeing the soccer, Pat Barnaville the National Rounder’s Coordinator joined by Charlene Hussey of Roscommon Sports Partnership who looked after Rounder’s, Sajad Hussein & Mohammad who encouraged the children to try out cricket, also Michael Carroll the County hurling development officer assisted by Brendan Flynn, Shane Nerney and Alan Egan who gave children a hurling experience.

With so many children involved, volunteers were extremely important and parents came out in full force contributing to the many smiling faces which matched the logo on the free jersey given to each child on arrival, that of a smiley face with the words “Roscommon Cultural Diversity.

Beautiful music by the Slovakian Family Band, entertained the large crowd basking in the sunshine and the appetising aroma of Brazilian barbeque being prepared by Carlos Ribas and his merry band of helpers, engulfed the air, as the kids played, adults chatted and the sun shone brightly.

I also want to acknowledge the support of the Gardaí and the Civil Defence today, having them present is a necessity at events like this and it provides peace of mind for the organisers.

Nora added “thanks to Wispy’s Castlerea, Corrib Oil Castlerea and Molloys Artisan Bakery, Roscommon who sponsored some supplies for the event and a really big thanks to the principal and staff of Roscommon Convent Secondary school for the use of their pitch and facilities.

The RWN Intercultural Project will focus on the arts over the next few months and plan to put on a performance for Cultural Day, 21st September in the Roscommon Arts Centre. Watch this space, our facebook and website www.rwn.ie for more info or to get involved please call 094 9621690 to get involved

Also in this Section